GROWTH AND MODELING
These processes are fundamental for acquiring peak bone mass and the definitive morphology of bone. Linear growth takes place in cartilage, followed by endochondral bone formation. Growth in thickness is produced by periosteal apposition, accompanied by endosteal resorption which gives rise to enlargement of medular space. This process is the result of the influence of local and systemic factors as well as mechanical forces.

BONE REMODELING
Once growth ceases, bone dynamics continue through bone remodeling. This takes place in Bone Remodeling Units (BRU), where old bone tissue is replaced by new tissue at the same anatomic site. The coordinated action of osteoclasts and osteoblasts on the same bone surface constitute the basic multicellular unit (BMU). The new tissue resulting from the action of this unit is called the bone structural unit. In this way adult bone tissue is renewed at a rate of 7-8% of the skeleton per year. BRU occur throughout the trabecular bone perimeter and in cortical osteon.

Each cycle of bone remodeling consists of four phases

Activation
Process whereby local and systemic factors activate the remodeling cycle, via osteoblast activation. A detailed description of the factors and mechanisms that determine bone remodeling is beyond the scope of this chapter. Briefly, the cycle of remodeling is activated by the osteoblast cell line which in turn favors the expression of so-called “osteoclast differentiating factors”. Thus occur the processes of activation, migration and differentiation of hematopoietic cells, which are precursors of the osteoclast lineage (MG-CFU), giving rise to multinucleated osteoclasts. There are also systemic (parathyroid hormones, vitamin D metabolites, osteocalcin) and local factors (cytokines, especially IL-1 and TNFa) that activate the remodeling cycle by various mechanisms.

Resorption
Resorption is initiated by osteoclasts and lasts 1-3 weeks. Osteoclasts produce acid phosphatase and proteolytic enzymes (catepsine) that liberate bone mineral and fragments of collagen. Some of these fragments, such as pyridoline and deoxypyridoline, are excreted in urine and are used as markers of bone remodeling. Osteoclasts excavate cavities - Howship´s Lacunae - in the trabecular bone, or resorptive cones or tunnels in compact bone over a period of 1-3 weeks.

Quiescence phase
Between the resorptive and formative phases there is an intermediate, apparently inactive phase called reversal or quiescence which lasts for 1-2 weeks. This is when a thin layer of material rich in glycoproteins called “cement line” is deposited on the resorbed surfaces and serves as a base for the osteoblasts.

Formation
Osteoblast precursor cells, derived from marrow stroma progenitor cells, are activated by proliferative factors from bone resorption, and then differentiate into mature cuboidal osteoblasts. These occupy the resorptive area and begin to synthesize type 1 collagen and other proteins (osteocalcin), which combine extracellularly to form osteoid, i.e. the organic matrix that will subsequently be mineralized. The new osteoid is deposited in layers, from the cement line. This osteoid begins to mineralize after approximately 12-15 days, at an initial rate of 1 mm/day. As the mineralization front advances, it leaves behind a mineralized bone in the form of hydroxyapatite crystals. Thus the osteoid thickness, which under normal conditions is about 9-12 microns, is directly proportional to the rate of organic matrix formation and inversely proportional to the advance of the mineralization front.

This phase lasts for 1-3 months, and ends when the new bone structural unit is completely formed. The new bone surface is then covered by flattened lining cells. A long period of quiescence follows until a new cycle of remodeling begins. 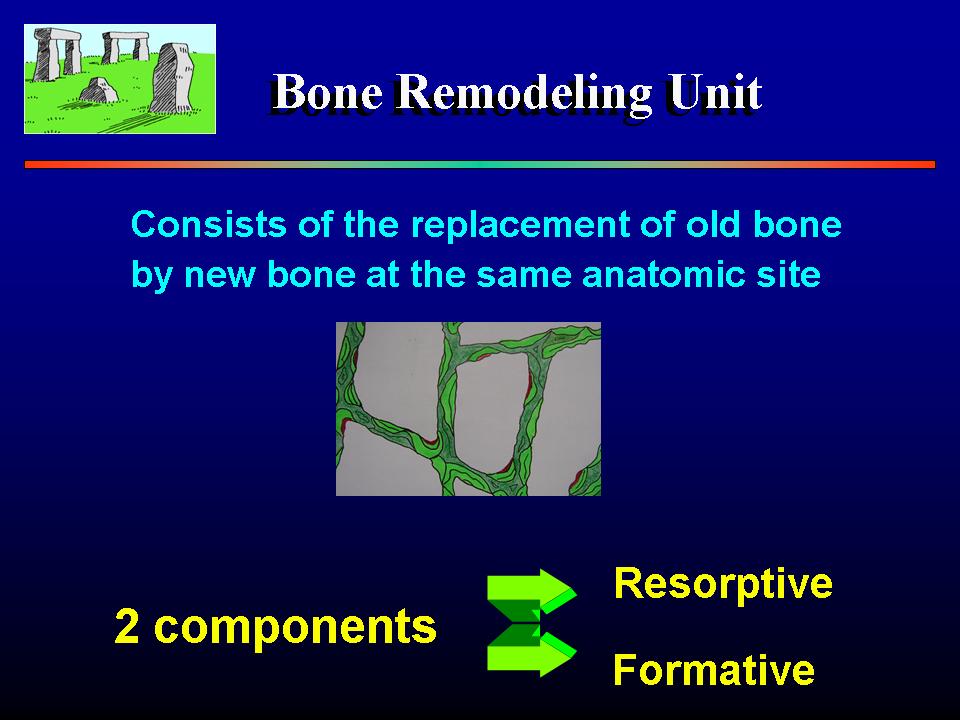